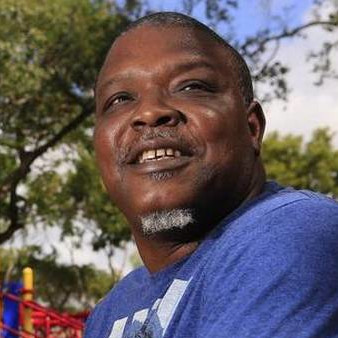 "Henry Larkin, a heart attack survivor who suffers from diabetes and high blood pressure, knew something was wrong. He couldn’t stand for more than 20 minutes before going numb and falling down. He wanted to go to a doctor, but there was a problem.

“I don’t have any insurance,” said Larkin, 54, an African-American construction worker and handyman from the city of South Miami. “The emergency room was my primary-care physician.”

His mother signed him up for the Green Family Foundation Neighborhood Health Education Learning Program (NeighborhoodHELP), an initiative of Florida International University’s Herbert Wertheim College of Medicine, which sends medical students into underserved communities to track and monitor the health of families. The program, in partnership with South Miami Hospital and Baptist Health South Florida, has expanded into the city of South Miami.

Upon first visiting Larkin at home more than a year ago, Dr. David Brown, chief of family medicine at FIU’s Herbert Wertheim College of Medicine, first visited Larkin about a year ago.

Heart disease is the No. 1 killer in the United States and stroke is No. 5, according to the American Heart Association. The risks of contracting cardiovascular disease, including heart disease and stroke, are even higher for African Americans. Nearly 44 percent of African-American men and 48 percent of African-American women have some form of cardiovascular disease, according to the federal Centers for Disease Control and Prevention.

Larkin, who was 6-foot-3 and 270 pounds, had the most common conditions for increased risk of heart disease and stroke: high blood pressure, obesity and diabetes. The prevalence of high blood pressure, or hypertension, in African Americans is the highest in the world, according to the Heart Association...

Brown discovered why Larkin couldn’t stand for more than 20 minutes. He was diagnosed with spinal stenosis, a narrowing of the open spaces in the spine that places pressure on the spinal cord and the nerves that travel through the spine to the arms and legs. It occurs most often in the lower back and the neck.

In November 2016, Larkin underwent a laminectomy, a surgical procedure to remove the back of one or more vertebrae, usually to to relieve pressure on the nerves. Since the surgery, he is no longer numb but still suffers from back stiffness and soreness.

Larkin now walks 30 minutes daily and performs back-stretching exercises. He also takes his medication and has made changes to his diet. He stopped eating rice, bread, fried chicken and pork, and eats more vegetables, fish, chicken, turkey and drinks a lot more water. He also eats three small meals a day instead of one bigger meal for dinner.

“I really began to lose weight once I started doing that,” said Larkin, who has lost 10 pounds.

Larkin credits NeighborhoodHELP for the care he has received. The program is attempting to get him a CPAP machine to help ease his sleep apnea, and he is signing up for programs offered through pharmaceutical companies to receive lower-priced prescriptions.

“Without their help, I probably wouldn’t be here right now.” Larkin said.